In the last blog I explored that investments in information technology over the last few decades did not result in any significant improvement in productivity. So the obvious question is—Has all the investment been a big waste? The answer depends on who you ask.

If access to data and information is the goal, then IT investments are very successful. It launched a new industrial sector with many new companies and created a great deal of wealth. Today we have all kinds of data available on our smart phones and we can search obscure information right from our couches. Unfortunately, the easier access to data and information has created an illusion of increased productivity. We started to believe that all this new data would make for better decision making. But, as we saw in my last blog, the economic measure of productivity called Total Factor Productivity (TFP) showed little impact.

To many folks in traditional industries this is a compelling argument to dismiss the value of IT innovation so far. Thus we are starting to see a realignment of IT investments and resources. It has been an IT focused view so far. I, however, believe that is about to change as there is another side of this story still to unfold—it is called Industry 4.0. This new initiative is shifting the focus from data collection and retrieval to extraction of pertinent information required for decision-making and control. Instead of IT focused infrastructure, it is crafting organizations that are consuming information for targeted decision-making.

I will explore this fourth industrial revolution, which is already underway, in more details in my next blog. In the remaining space here I want to look at the proven drivers that do improve productivity. I will try to show how investments in Industry 4.0 should be aligned with the goals of the organization as a whole and not just for data centric view.

MANAGERS HAVE GREATER IMPACT ON PRODUCTIVITY THAN DATA

Managers, who mentor their people and provide clear guidance, have the single largest impact on workers’ productivity. A data analytics company studied employee retention by examining 1000 workers at a call center with 100 of their managers. They found that factors mostly affecting an employee’s performance depend on the supervisor to whom he/she reported. While some factors are attributable to the employees themselves were significant, but they played a much smaller role. Detailed analysis also found that no factors other than the supervisor and the employee relationship stood remotely close. This study was technology invariant since all teams had same technology. Technology was not an active factor thus no conclusions about technology could be made.

Managers play the most important role in creating a positive and effective work environment. Without the upbeat attitude to do a good job, there is no motivation to do so regardless of what tools and technology are provided. It is not hard to conceive that an ineffective manager can be the number one cause of low productivity. Unappreciated and disinterested employee not only have lower output but they also drag the overall productivity of the entire team. The role of people, particularly the decision-makers, is at the crux of improving productivity. 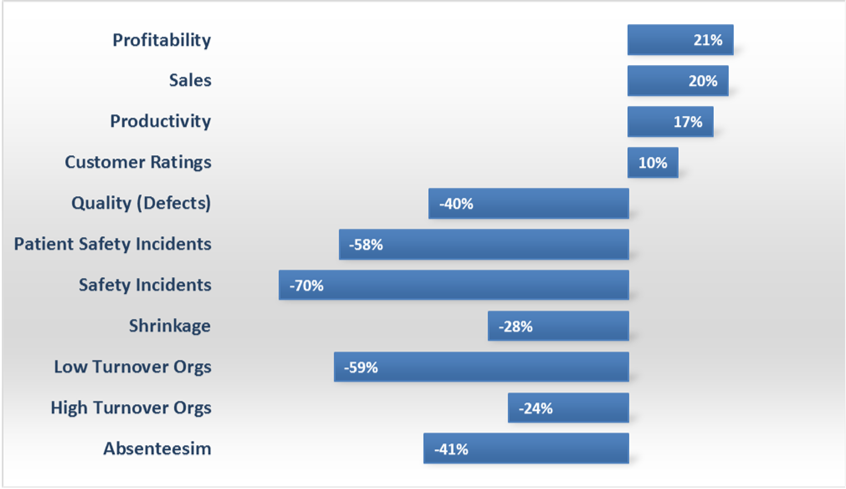 Work units in top-quartile with the best employee engagement outperformed bottom-quartile by 10% in customer ratings, 17% in productivity, and 21% in profitability as shown in attached chart1. Almost identical results were found in the previous study in 2012. Other studies such as from Bureau of Labor Statistics among others have also found similar results.

In the next blog I will explore the push into Industry 4.0, which many people view as technology creating a highly connected world. Many view this as the extreme automation where machines will talk to each other and leave us humans in the dustbin. I do not believe that viewpoint is remotely close what is to come. In the next blog we will dive into the data to show how automation has actually increased employment instead of reducing it, although with shifts in geographic as well as knowledge demographics. I will also share my perspective of the above findings in how the role of people will impact Industry 4.0 rather than the other way around. Stay tuned!