In last blog I explored the role teams play in organizations. Team members work together with best intentions yet over time teams lose their productivity and do not perform well. Growth in information technology in 1990s and 2000s delivered strong gains in overall productivity, but of late it has fallen. Although technological innovations have not slowed down, the productivity growth has fallen back to pre-1995 era.

A myriad of reasons exist for why teams do not perform at their peak ranging from behavioral to technological issues. Behavioral reason for failure, as reasoned by some experts, occurs from team members not holding each other accountable to avoid confrontation. They believe conflict is healthy as it can force people into performing. I suppose these experts assume that without such compulsion we do not take our responsibilities seriously. I believe when placed in such an inhospitable environment we would exert minimal effort just to get by.

At Menawat & Co. we have found that a collaborative environment is the foundation for overall increase in team productivity. Leading organizations nurture a culture where everyone understands their role, responsibilities and the value they create for the team and the organization at large. We all perform better when we understand why we are doing something and our work is valued. This observation is an immutable tenet of our corporate turn-around and performance improvement efforts.

While the behavioral culture is very important, it alone does not explain the slowdown in overall productivity. Technology plays an even larger role.

NO ONE WORKS IN VACUUM!

Regardless of the type of work, we need access to information and content from various sources. Corporations invest enormous in technology to gather data of all sorts. There is hardly a corporation today that does not have vast amount of data stashed away in databases. In 2010, then CEO of Google Eric Schmidt stated – as much information is created in 2 days as it was from dawn of man through 2003. He further went on to say – I spend most of my time assuming the world is not ready for the technology revolution that will be happening to them soon. Wow! His statements were 6 years ago.

Technologies such as email, messaging, document repositories, enterprise systems, calendars, to-do lists are all available on smart phones these days. Mobile technologies have made communication very easy. Seeking out more information is just a few clicks away. Then why are we not more productive? With the avalanche of information falling upon us from every direction it would seem that we should be making better decisions and gaining productivity. Unfortunately, it is an illusion; the data bares it out.

PRODUCTIVITY NOT RISING WITH MORE INFORMATION 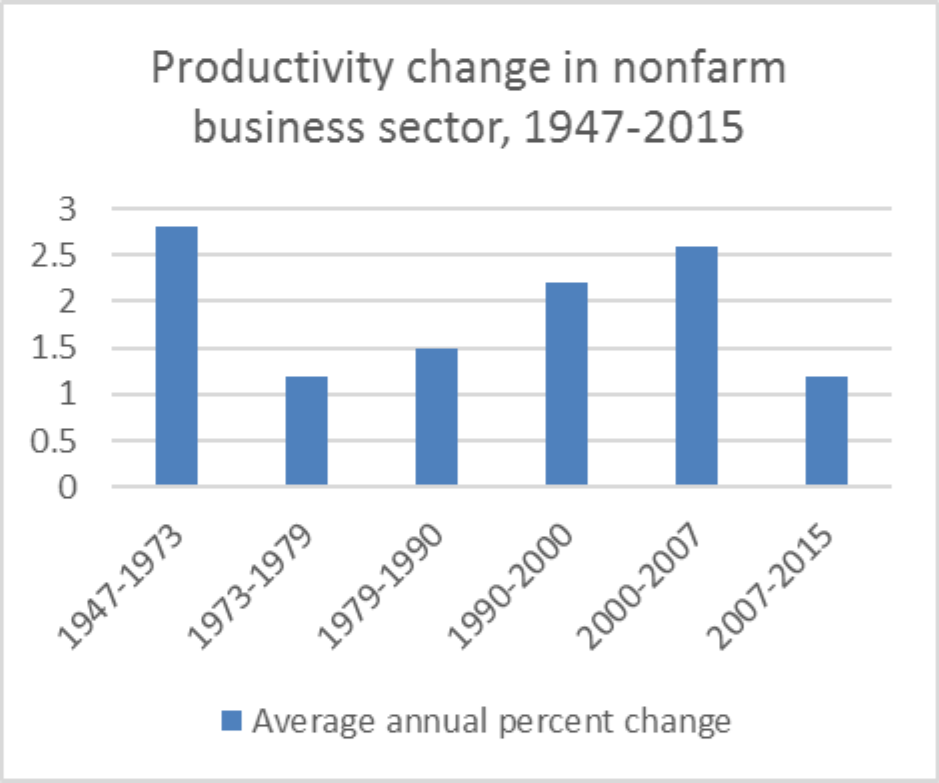 The report goes on to state:

Over the past decade, however, the exceptional pace of productivity growth has disappeared, returning to roughly its pre-1995 pace.

Data from Bureau of Labor Statistics also suggests the same (May 4, 2016). How can it be in such a connected world where we can get our hands on information so easily?

INNOVATION DILEMMA: WHAT IS GOING ON?

Economists use a measure called Total Factor Productivity (TFP) to understand the role of innovation. The increase in TFP growth from mid 1990s correlates with the contribution of computers, communications equipment, software, and, of course, the internet. Such a boost in technology improved information management and communications but as the data from the Fed clearly illustrates, the technology has matured and is no longer fueling further growth. Some have wondered about the significance of IT in business and have questioned whether IT innovations are at par with the great innovations of the past. Whereas, others are betting on future IT innovations such as robots and machine learning. The TFP trend, however, suggests a decline in innovation since 2003.

Ironically, IT producers and industries that are extensive users of IT experienced the TFP slowdown the most. Industries not using IT intensively have not seen a rise followed by decline; they continue coasting at steady state. Was IT revolution just a bubble?

Considering the technology landscape and the free spirited money flowing into new ventures suggests no pause in innovation. However, new innovations are not translating gains in overall productivity. It continues to create riches but is not powering economic growth for the customers. The wealth and power of Silicon Valley is rising unabated, which is not matched by other sectors, creating an unparalleled shift in economic balance.

Will the IT innovations of today yield productivity gain for the customers anytime soon? That will have to wait for the next blog, when I will explore the kind of innovations required by the mainstream businesses.